I only had one “Q”, so I just threw it in with the”Rs”. My list is starting to wind down, believe it or not. And I really haven’t watched as much anime as I thought (over time). Still, considering that I spent about a month and a half of my life watching anime (this counts shows like One Piece, which I have watched 377 episodes of), I’d say that I still watched a crap load of anime in my lifetime (think about that….a month and a half straight).

While I’m on that topic, you may realize that shows like One Piece and Bleach (shows that I’ve seen quite a few episodes of, but haven’t finished), are not on this character list. That it because they aren’t finished yet. I decided not to put the 20+ shows that I’m currently in the process of watching on this list because I have instead elected to add my favorite character from said show to The Character Page whenever I finish a show. Likewise, whenever I list a character from a show (in these posts), assume that the show in question has been completed unless I’ve said otherwise. 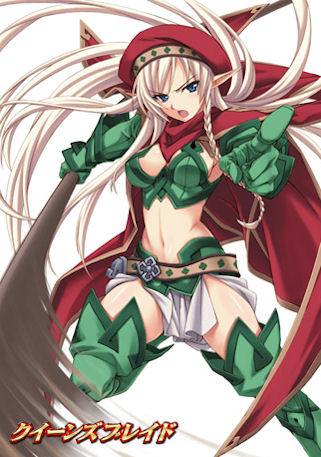 Queen’s Blade is great. It has boobs. I’m not a fan of fanservice anime much. But hey, boobs are great. Allean kicks ass (as I’ve said and taken back many times). Allean:

I think I made my point.

Tomo is the epitome of someone who is not a pedophile. He’s actually the man. In this series, Tomo is someone who only likes older women, specifically, his teacher, who is a hot babe. He even puts the moves on her, and in my opinion, could have had a serious chance at copping some sensei ass if he kept going.

Subsequently, he hates lolis. Take note of Rizel in the picture above. He usually gets annoyed with the simple fact that she even likes him, and routinely punts Rizel, abuses her, and treats her like general shit. That is, until, he sees what adult Rizel looks like. When this happens, he notices boobs, and stupidly loses sight of his babe teacher. Overall I actually liked this anime a fair amount. I thought it was hilarious, and enjoyed it’s repetitive humor (which I sometimes like, and sometimes dislike, in this case, it mainly involved punting lolis, so I found it acceptable). Rizelmine was awesome. And yes, Rie Kugimiya played the voice of Rizel perfectly.

Speaking of Rie Kugimiya, here’s a somewhat surprising character for her to voice (in a good way). She may be smiling in the picture, but don’t let it fool you, she doesn’t smile much. This is a good thing, because her character type is that of a shy girl, who has a crush on the main character. Oh, and she’s a stalker. She is an awesome stalker. She takes her stalking seriously, and is very good at it. In fact, I’m hoping that she ends up turning into a real life person somehow, and starts stalking me. I would let her stalk me for ages (a week) until I gave in and let her become my slave for like. Let me list off some things that make her awesome (or else I’ll start to ramble).

That’s about it. The runner up (which I have to mention) can be none other than Normal Moka (with the rosary not attached) because she’s a true ass kicker who does give a shit. But I will generally always choose a stalker figure (I messed that up in Gantz when I chose the wrong person).

Well it obviously wasn’t going to be Jun (he plays with fuckin dolls), so who could I choose? Well duh, obviously the most badass doll there is, Suigintou. Rie Tanaka (who is AWESOME) voices her (isn’t it weird that my two favorite seiyu are both “Rie”?) and does a good job as usual…

Now the thing about Suigintou is that she is considered at first to be the “bad guy” in that she wants to win the Alice Contest (I think that’s what it’s called…it’s been a while since I watched this). and will do so at any cost. She’ll use any tactics it takes, even if that means using some….err…harsh tactics to get ahead (she’ll kill you). Besides that, her character design is fuckin great and she also hates Shinku, and since I think that Shinku is a stuck up bitch, I can relate.

The main reason why Kenshin wins quite easily for me (besides the fact that he kicks ass), is his dark past, where he killed people like it was his job (cuz it was). In the English dub, he is called The Man Slayer. What sounds more badass than manslaughter? Nothing. That’s a bad ass name. However, Kenshin wants to make up for his dark past. Of course, even with accepting his new life at the dojo, he still has to beat ass on many occasions, and does so swiftly and with bad assary.