NOTICE: At this point, I’m not actually sure what this bill entails anymore, so if I’m missing something (which I’m 100% sure I am) please correct me and feel free to call me whatever names you want. Cunt is a good one, although a lot of people prefer douchebag as well. Either is fine. maybe combine them to call me a “cunt douchebag” which is pretty much the same thing as a douchebag, but it sounds funnier.

You know this song? Well it may be featured in my title, but I’ll be damned if it has anything to do with what I’m about to say. In fact, I’m going to go ahead and say it’s the exact opposite of what you’re about to read*. 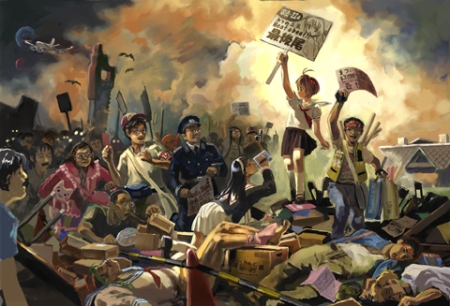 So then… If you’ve got any semblance of knowledge regarding anime news, then by now you’re well aware that this bill was passed by Japan’s bureaucratic cunts in charge. Truth be told, I could honestly care less about this bill. In fact, I think it’s pretty weak. If the anime industry starts dying because of this bill (which it won’t at all), then the Japanese Government would probably be forced to change or repeal it anyway (they’re not just going to let anime die, and frankly, I don’t think that idea is possible of plausible anyway). So until my anime and manga start to suck, I’m not throwing any type of fit about it.

Actually, the ramifications of this bill might not be as bad as people think. Fuck, it might even do some good, because (if I’m to understand the bill correctly) it’s getting rid of all the shitty fanservice anime (like..the really blatant stupid shit. I’m sure shows like To LOVE-ru will be close to unaffected, because there’s nothing immoral or underage going on), and will force anime studios and writers to stop writing shitty shows about younger sisters. What’s wrong is the fact that this bill exists. It’s the whole principle of the thing. A government shouldn’t be able to ban something that a person says or writes.

Basically, any time a government puts limits on things people say or write (or in this case, draw), I’ll get pissed off, I’ll get angry, and, ironically, I’ll usually write my bests posts (not true for this post, because I quickly got sidetrack and lost all anger, and then I proofread sort of, and changed all of the stupid shit that I said that didn’t make sense or wasn’t researched properly). The same is true for this bill. The fact is pretty simple:

If you don’t like it, don’t fucking read it.

Holy shit! Did I just solve 100% of all problems related to explicit content and program regulations? Yes. I guess I just kick that much ass. “But what about the children?” you may ask. What if they see this ecchi stuff and get all fucked up in the head from it? The answer for this is easy too:

Wrap the shit in plastic, and have a warning that the contents “might not be suitable for children under the age of “x”. This makes it incredibly easy for parent to censor what their children are reading/watching. And hey, I realize ecchi shit isn’t exactly porn either, so it would be wrong to ban everyone under 18 from viewing it, so let’s make it so that you have to be over 13 to be able to buy it. 13 is a middle school age (I think), and that’s about the age when kids start having one week relationships and all that non-sense, so it’s a good time to let them start finding out how shitty most ecchi anime is.

We already know that the Japanese, for all of their good attributes, are complete wackjobs. They even censor their pornograpy, which completely defeats the whole purpose behind pornography in the first place, so something like this doesn’t surprise me in the least. But let’s no put blame solely on the Japanese for passing some real pansy-ass laws, because it’s another, related idea that leads to the ruination of a nation.

Now that I solved an entire countries “crisis” in little over 2 minutes, and called out the Japanese government for being a bunch of whiney little bitches, let me now move on and enlighten everyone about the bigger picture, which is the world as a whole. With this law, it has now become clear to me that there are nations besides the USA that are becoming whinier and more obsessed with being politically correct as time goes on. It’s like every country is trying to out-do other countries in being the most politically correct. Fucking twats. I thought the United States was bad, but Japan has always been pretty pussified.

Pussified (adj): To become like that of a pussy. Whiney, overly sensitive, probably gets their ass kicked on a regular basis for crying.

Political Correctness can go fuck itself.

Yet the restrictions continue. Why? In the streets of America, it’s illegal to have sex (I’m guessing, if it’s not, I’ve never seen it). In Spain? Not so much. People like to get down with…sex all the time. In the bedroom, in the streets….it doesn’t fucking matter, and what’s more, no one really gives a shit. It’s just fucking sex in public. You don’t see the government trying to force media to revert back to the days of the 50s, where women had to wear sheets and kissing was considered completely inappropriate for TV. Europe as a whole is a lot more laid back. They don’t get all worked up about shit that really isn’t a big deal unless you MAKE it a big deal, which is exactly what some countries are doing.

It’s not just sexual related stuff either, but that’s a post for another day (literally, it’s a post that I’m going to put out on another day).

So to sum this up, everyone’s too God damn sensitive. And after reading THIS POST, I’ve really gotten mad. First, here’s the excerpt:

However, there are many manga titles targeted at working adults that will be affected by the proposed law. Off the top of my head, I imagine titles such as Kiss x Sis, Gantz, Berserk and various yuri/yaoi titles will be faced with a dilemma.

Initially, I really didn’t care about this law being passed. I even thought that it might do some good. But Gantz!? Berserk!? (I could care less about KissxSis) Now I’m fuckin pissed off. Gantz is of the greatest manga ever made. I can only hope that the creators don’t change shit in their manga, and give it an 18+ rating if anything. These are perfect manga and should not be changed, yet, refusing to change can seemingly cost them the big bucks, as DarkMirage points out. You know what? Just read that post.

With much of the world become far too politically correct, there is only one thing that we can do:

We have to rise up, make me the President, and stop being so God damn sensitive. As a nation, we sound like a bunch of whiny, bitchy, feminists. We need someone who can take congress by the balls and make them do what should be done. That’s another problem. Political parties. They don’t give a shit about the country, they just care about their party. Right now, our President is Democrat, but he can’t do shit because the House (I believe) is majority republican. It’s kind of the same about having the Yankees and Red Sox fans collaborating together to decide which team is better. Nothings going to get done, no matter how much stats are there to back up an opinion about why a player is good. Politicians suck. I honestly think that  business owner would do a better job at running the country, given the right advisors, and providing he isn’t a greedy ass hole like most business owners. Anyone with common sense can run a country.

There’s a lot that could help this country that isn’t being done because people are too stupid  and stubborn to accept change. Anything can be tried, and if it doesn’t work out, it doesn’t work out. Me as president would be GREAT for the economy (it’s really not that hard to fix), good for morale, and GREAT for anime and manga. So get me in office asap, and I guarantee that no one will look at America like it’s a fucking obnoxious dick-fucker again.

I’d also bomb the shit out of Kim Jong Ill, because that asshole pisses me off.

* – I was going to suggest starting WWIII somewhere in this post. In fact, that was going to be the solution, but then anime might be destroyed completely by war, so I decided that was a bad idea. Just make me president, I’ll make the world perfect (more to come on that).