I called it wayyy long ago.

I told you all many times that Mysterious Girlsfriend X would kick a whole shit load of ass, yet for some reason, whenever I’d read a Spring 2012 Anime Lineup preview, I’d see people writing MGX off as a “meh” series.

“It’s about drool? That’s weird I’m not going to watch it.”

You’re all idiots. Clearly most of you were clueless when it came to understanding the shear awesomeness that is Mysterious Girlfriend X.

But still, even I had my hesitations about Mysterious Girlfriend X. Would Hoods Entertainment completely botch this series and turn it into a fanservice shit-show? Would the voice acting be good enough to represent the characters? Would  the writers and director do the manga justice?

The first episode of Mysterious Girlfriend X was not a home run, it was a game-ending, world-series clinching walk-off grand slam. It was an Eli Manning touchdown pass in the last minute of the Super Bowl. It was a Spirit Bomb against all evil. It was perfect.

I don’t think you could cast a better cast of seiyuu.

Tsubaki is perfect (although to be honest, any normal sounding voice actor could do a good job with him). Urabe is PERFECT. I am SO satisfied by the job that Ayako Yoshitani is doing as Urabe that I may write her a letter expressing my happiness with her skills.

Except I won’t actually do that, but I am really happy with the way she’s voicing Urabe.

This scene stood out to me as fantastic voice acting. I loved it.

The directing is arguably the best I’ve seen in ages. Ayumu Watanabe is awesome. I could talk about why he does such a good job, but to get the full force of understanding, you really need to watch the episode yourself. But I’m going to get really specific for a second.

In the scene were Tsubaki finally asks Urabe out, we get a flash, quite literally, of Urabe’s underwear holstered scissors. They’re only visible for a tenth of a second, and that’s what makes it so effective. After that flash, nothing else is touched upon in regards to her scissors (at least not yet). It’s such a perfect bit of directing.

“Why were they in her underwear?”

No answers are given. It’s a small bit of forshadowing. “Why the fuck does she have scissors tucked into her panties, and what the fuck does that have to do with anything?”

Ho ho ho ho, you’ll have to wait and see my friend!

And the scissors are never even touched on or explained any farther. PERFECT.

What else can I say? How about the the art/animation. The animation is solid. As far as animation comes, it’s pretty much your standard stuff, but the art remains very true to the manga, which I LOVE. The 90’s feel that this show has kicks ass. I mean, look at Tsubaki’s room? His posters are just… 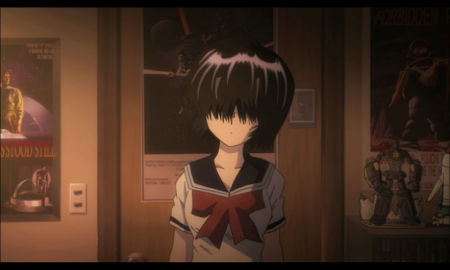 The smiling robot thing is all the way to the right (your right). I don't know what movie that's supposed to be. Also, loved how they called Star Wars "Star Mars."

All of his posters were movie classics from back in the day (hard to imagine that Star Wars is 35 years old), which I think is very much a mirror of the show’s style. It’s got a classic kind of feel to it due to the throwback art and amazing music.

Yeah, the music kicks ass. It gives the show almost the same feel that an animated movie has. In particular, a Studio Ghibli movie.

Did I just do that?

Did I just draw a comparison of a Studio Ghibli movie to an anime about tasting drool???

Fuck yes I did, now shut up and listen:

That’s probably the big thing here. Everything flows perfectly and nothing seems forced. And that comes back to the directing. In a time where a lot of shows seem pretty cheap and kind of cliche (Kore wa Zombie, My Little Sister Can’t Be This Cute, etc), Mysterious Girlfriend X is anything but cliche, and I’m not talking about the plot so much as I’m talking about the characters and their interactions.

Take Tsubaki. He’s a pretty plain character. He’s almost a typical male lead, but it works because he seems so natural. He’s believable, and that’s why Mysterious Girlfriend X is so damn fucking awesome. All of the characters are believable, even if they are tasting drool and cutting up signs with panty scissors and wearing underwear that limits their kicking ability so they don’t kill someone with their kicks, and  writing plays called “Mysterious Girlfriend Y” that happen to have the exact same plot as the mang- oh wait, we’re not even close to all of that extremely awesome shit. 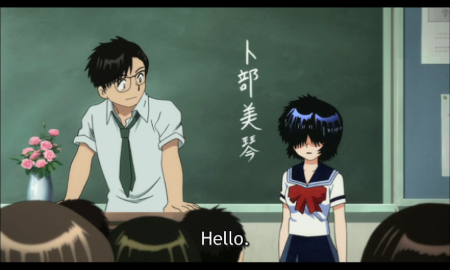 It's about time someone animated you.

God this show is awesome. I can’t wait to throw it on my top ten after it ends (if it remains this good).