There’s a shitload of different character types out there. Many have been repeated over and over in many different ways, but they all keep the same basic concepts. For example. We’ve seen plenty of Yuki Nagatos out there; characters who don’t show emotion in their tone of voice or on their face. Of the many different character types out there, what kind do you like the most? Truthfully, I don’t really care, but you’re all probably dying to know which one’s I like, so…

WHAT THE HELL???? SHE MADE AN EXPRESSION OF ANNOYANCE!!!! This must be a ONE TIME EXCLUSIVE!!!

This type of character would be the one I just talked about, which I refer to as the “Yuki Nagano Type”. Almost always a female, this type of character just can’t be bothered with pesky emotions or facial expressions. This makes them much easier to draw, and reminds me of a Far Side comic about a dog, which I can’t remember…..facial expressions of a lab? I can’t remember. 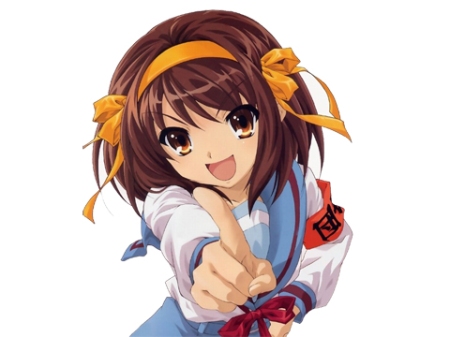 This type would be a typical Haruhi type. Why am I taking all of my examples from Haruhi so far? Because that show has several different character types in it, and when you think of “eccentric character” who doesn’t think of Haruhi Suzumiya? Torako from Hyakko also comes to mind, but there are many many more eccentric characters than just that.

These characters are, as stated, eccentric. The do things on whims, generally have ton and tons of energy, and are almost always happy (except for like….one episode or so).

Anyone who know me knows that this is pretty much going to glourify Rie Kugimiya, who is the best known for her tsundere characteres, from Shana [Shakugan no Shana] to Louse [Zero no Tsukaima] to Nagi [Hayate n Gotoku] to

Okay we get it…

So anyway, tsundere might be one of the most popular character types. They are generally known for hiding their emotions or not being true to them. They have a touch exterior, but beneath that, they are incredibly soft.

Oh here we go. This is the opposite of a tsundere. They act soft, but once you get to know them, they turn out to be psychotic as fuck. I always think of Rena from Higurashi, even though she technically isn’t a yandere. But that’s the type. Starts off loving cute things, ends up wielding a huge butcher knife and lopping people’s heads off.

Go cry in a ditch.

This could be a male character of a female charcter. I generally think of a male character, because if a female is being a pussy then she’s simply seen as being ‘cute’, but if a guy is a pussy, which in most cases, he is, then it means he is a fucking pussy, as in: Perfectly Useless Sack of ShittY

Yeah, I just made that up. Yeah, it’s not the greatest.

I hate pussy characters because whenever I watch them I wonder why they’re always so afraid/crying. Just stand up and be a man with some balls and some willpower! Pussy characters love to roll over and die and that pisses me off. 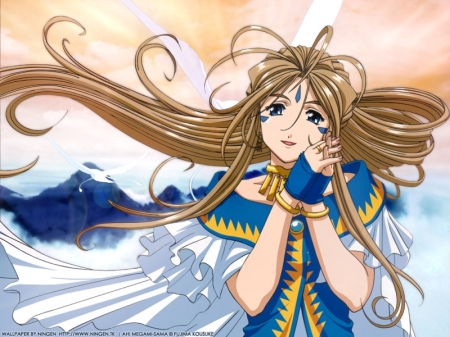 I’m looking at you Belldandy. No one likes a girl who agrees with everything they say. That’s boring. Honestly, You character types, who act like maids (or slaves) and only aim to please others piss me off a lot. It’s like you’re not really a character, you’re just an extension of the character that you’re trying to please. I don’t like you at all, but maybe someone does.

I’m a big fan of the Tomboy character. I’m not sure what it is exactly, but something about girls being depicted outside of their natural element, rather, their ‘assumed natural’ element, just gets me all fired up (in the pants)…..

Clearly, I like women with a little bit of zing to them. Less of the norm, more of the abnorm. Plus, a tomboy is like a girl who you can shoot the shit with and not have to worry about them getting all questiony with you. For example:

“What do you mean it looks nice today? Are you saying it doesn’t look nice on other days!? I’m so super offended for NO FUCKING REASON OTHER THAN MY VAGINA-“

A tomboy might instead say, “Shut up you asshole.” which is totally hot. That being said, it makes it even sexier when they show feminine emotions, but this character type isn’t really based around sexiness or arousal.

Most tomboy characters are bad ass, and for the most part that’s why I like them.

If you think this needs an explanation, then leave this site now.

So that’s that. What character type do you like most? Is there one I forgot (probably)? Which one? What’s my favorite?

What is my favorite?

I guess the tomboy? No wait, bad-ass. Hold on, tsunderes. Wait a second…..where are the stalkers on this list? FUCKKKKKKKKKKKKK.

I must say, the tomboy might be my favorite. I always root for them in shitty harem anime, and they can be badass too.

So this is the first post of Draft Week, where I post a whole bunch of shitty, old drafts, unaltered, for you all to see. I’ll probably post about 5 posts this week total. If I can upload one every day then I might do that, but I’m a busy guy.